Jugglers and juggling are mentioned five time in the Talmud1. The earliest juggler mentioned is Rabbi Shimon ben Gamliel (circa 10 BCE-70 CE). He was world renowned as a great sage and held the title of head of the Sanhedrin (High Court). Eventually, he received the position of Nassi (prince). A direct descendant of King David, he was held in great esteem as a leader by the entire nation.

During the festival of Succot (Tabernacles) the inhabitants of Jerusalem had the custom of holding a "Simchat Beit HaShoeva," or "Celebration of the water-drawing," referring to the water drawn from a spring on the outskirts of Jerusalem and used in the Temple service. The source of that custom was the scriptural verse, "You shall draw forth water in gladness" (Isaiah 12:3). It was at the celebration that Rabbi Shimon ben Gamliel juggled2.He used a home-made prop which consisted of a dowel with a large wick tied around one end and fixed with iron tacks. This wick was soaked in oil and set ablaze. This seething inferno then sputtered and shone with great intensity, and he would toss it from hand to hand. his crowning achievement was the ability to juggle eight of these portable bonfires3.

This feat was performed in the courtyard of the Temple in front of thousands of spectators who either lived in Jerusalem or had made the pilgrimage to the capital city from other parts of the land to celebrate the festival. In addition to the juggling, there was a feast, musicians and singers. This joyous scenario continued uninterrupted for many generations. Unfortunately, it ended when the Roman conquerors destroyed Jerusalem, razed the Temple and slaughtered the population. Shimon ben Gamliel was cruelly imprisoned and beheaded4. Most survivors of this devastation were eventually driven into exile.

The Roman attempt to destroy the Jewish nation failed, however, and the nation survived. The dwindling community in Judea was continuing its festivals even under the yoke of the Roman oppression. The sage Levi bar Sissa (circa 150-220 CE), who was a highly creative thinker, and who assisted in the compilation of the Mishnah5, juggled eight knives before the celebrants of the contracted community, including Rabbi Yehuda Hanassi6, the national leader and Nassi.

Even in the Diaspora, the tradition of juggling and joyous celebrations continued. A large community formed in Babylonia and it was there that the next mention of jugglers takes place. The author and teacher Shmuel bar Abba (180-275 CE) was a great talmudic scholar and was also known for his outstanding expertise in medicine and astronomy. He was eventually promoted to dean of the academy at Nehardea. And he juggled. He managed to perfect an act wherein he manipulated eight cups of wine without spilling a drop7! This display was witnessed by a large congregation including the Persian monarch, King Shapur8, who expressed his royal approval. His close relationship with King Shapur was to be maintained in the future as well.

It was also in Babylonia that another distinguished scholar, Abaye (280-339 CE) juggled before his congregation and his teacher Rabbah with eight eggs. Abaye was head of the Academy at Pumbedita and a successful farmer as well. He would study and teach all day, and irrigate his fields at night. He also owned vineyards and manufactured wine. He was described, even by his workers, as "modest and fair-minded."

Back to the land of Israel, where the last mention of juggling in the Talmud takes place, but at a different scenario. It was at a wedding, where the presiding rabbi9. This was in order to add to the celebration and to fulfill the precept of "gladdening the bride and groom" which the code of Jewish law describes as a great mitzvah (spiritual act)10. this was Rav Shmuel be Rav Yitzhak (circa 300-370 CE), who, when taken to his final reward, was described in the eulogy as "unique in his generation." In his juggling, he used three myrtle branches as props11. When one of his contemporaries, Rav Zeira, saw this, he said: "Isn't this embarrassing! We dance with one and he dances with three."12

The tradition of juggling at joyous occasions has continued. The bottle dancers in the wedding scene of the film "Fiddler on the Roof" (1971) are a later example. The story is that of a Jewish family living in a small village in Czarist Russia. The author, Shalom Aleichem (1859-1916) based the story on his own experiences in such a village. In the Hollywood film version, a group of four wedding guests perform a well-choreographed dance step while balancing bottles of wine on their heads without spilling a drop.

The return of Jews to their homeland has sparked a rejuvenation of the Simchat Beit HaShoeva. Today the presence of jugglers at these and other celebrations including weddings, Bar Mitzvahs, and Chanukah parties, is highly appreciated. Chanukah is the "Festival of Lights," wherein candles are lit to commemorate the miraculous victory of spiritual light over profane darkness. This victory took the form of the small monotheistic Hebrew army which vanquished the huge idolatrous Greek army. How appropriate to have a fire juggler present when celebrating occasions such as these! The swirling of patters created by the dancing flames is a wonder to behold and inspires all who see it.

footnotes:
1. The Talmud can be described as an ancient encyclopedia of spirituality and knowledge, covering topics such as ethics, history, law, biology, and mysticism. It was committed to writing 1700 years ago but most of it existed in the form of oral tradition more than 1000 years earlier. The format of its more than 50 volumes is of biblical commentary, written in Hebrew and Aramaic and arranged according to subject matter.
2. Talmud Bavli, Succoth 53a.
3. The Succot holiday season lasts eight days. The number eight is significant, representing the spiritual world. It is one above seven, which represents the physical world (as in the seven days of creation, seven colors of the rainbow, etc.). The juggling during this festival represents the superiority of a spiritual existence over an exclusively physical one.
4. See the Machzor for Yom Kippur (Artscroll Mesorah Publications, pp586-593) for a full account.
5. The Code of Oral Law, which forms the basis of the Talmud (see note 1, above).
6. 135-219 CE. Also known as "Rabbi" or "Rabbenu HaKodesh" (Our Holy Teacher), he was the great-grandson of the aforementioned Shimon ben Gamliel.
7. It is known that Levi bar Sissa spent his later years in Babylonia and the Shmuel ben Abba was one of his students (A.J. Kolatch, Who's Who in the Talmud, New York, 1964). Thus it is likely that Levi also taught Shmuel how to juggle.
8. Shapur I (reigned 241-272 CE), of Sassanian descent, who defeated the Roman Legions in the battle for Edessa. His portrait appears on a rock relief at Naksh-i-Rustam and on a gem in the Museum of Gotha.
9. Talmud Bavli, Ketuboth 17a.
10. Shulchan Aruch, Even HaEzer 65:1.
11. According to the medieval commentator Rashi (Rabbi Shlomo Yitzhaki of Troyes, France, 1040-1105 CE), "He continuously threw and caught the three sticks one after the other." Talmud Bavli, Ketuboth, loc. cit.
12. Maharsha, on Talmud Bavli, Ketuboth, loc. cit.
This article originally appeared in Jugglers World, Winter 1995, 1996 and in Horizons: The Jewish Family Journal Issue 8, Spring 1996. Used by permission of the author.

Raphael Harris lives in Jerusalem where he works as a writer and juggler. His hobbies include: travel, painting, historical research, zoology, and, of course, writing and juggling. Other articles about Judaism and juggling have appeared in Jugglers World (Winter 1994-1995 & Summer 1995), Kaskade (June, 1993, #30), Two-Ply Press (Volume 7, #9, September 1994), Yiddishkeit: The World Torah Review (Issue 24, Summer 1993), In Jerusalem (February 1995) and numerous other publications. Raphael has a nice web page, too.

And this is Raphael Harris at Scott Seltzer's wedding: 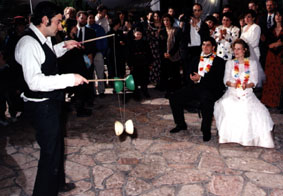